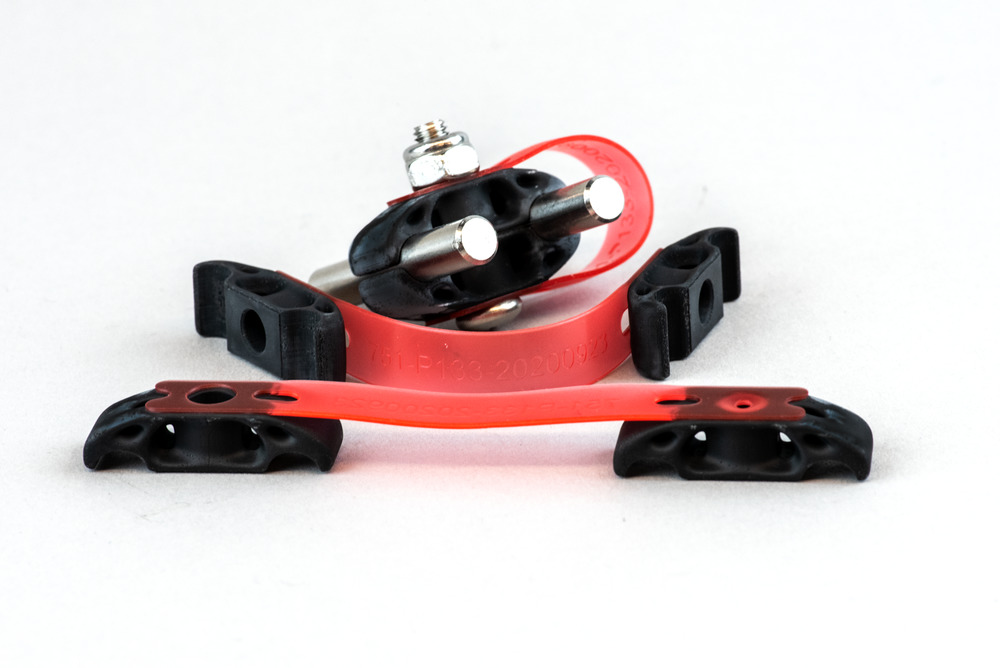 An Origin team participated in a US Air Force Advanced Manufacturing Olympics Approval Sprint for the rapid design, qualification, and deployment of an additively-manufactured F-16 fighter jet replacement polymer component.

Each year, the U.S. Air Force’s Rapid Sustainment Office (RSO) holds five Technical Challenges, in which participants come up with innovative engineering solutions that will help the Air Force keep its aircraft aloft and also help them modernize their fleet. Origin collaborated with nTopology and Stress Engineering Services on a project for the RSO’s Advanced Manufacturing Olympics Approval Sprints challenge, in which teams developed engineering solutions to help the Air Force sustain its fleet and infrastructure.

Origin and its collaborators focused on the C3175 family of hydroclamps. The Air Force uses thousands of these hydraulic line clamps in its fleet of F-16 aircraft, and they frequently fail after extended exposure to vibration, chemical environments, and heat cycling. Historically, these clamps have been molded from a material that off-gases toxic formaldehyde, in addition to having long production lead times and an expensive price point. 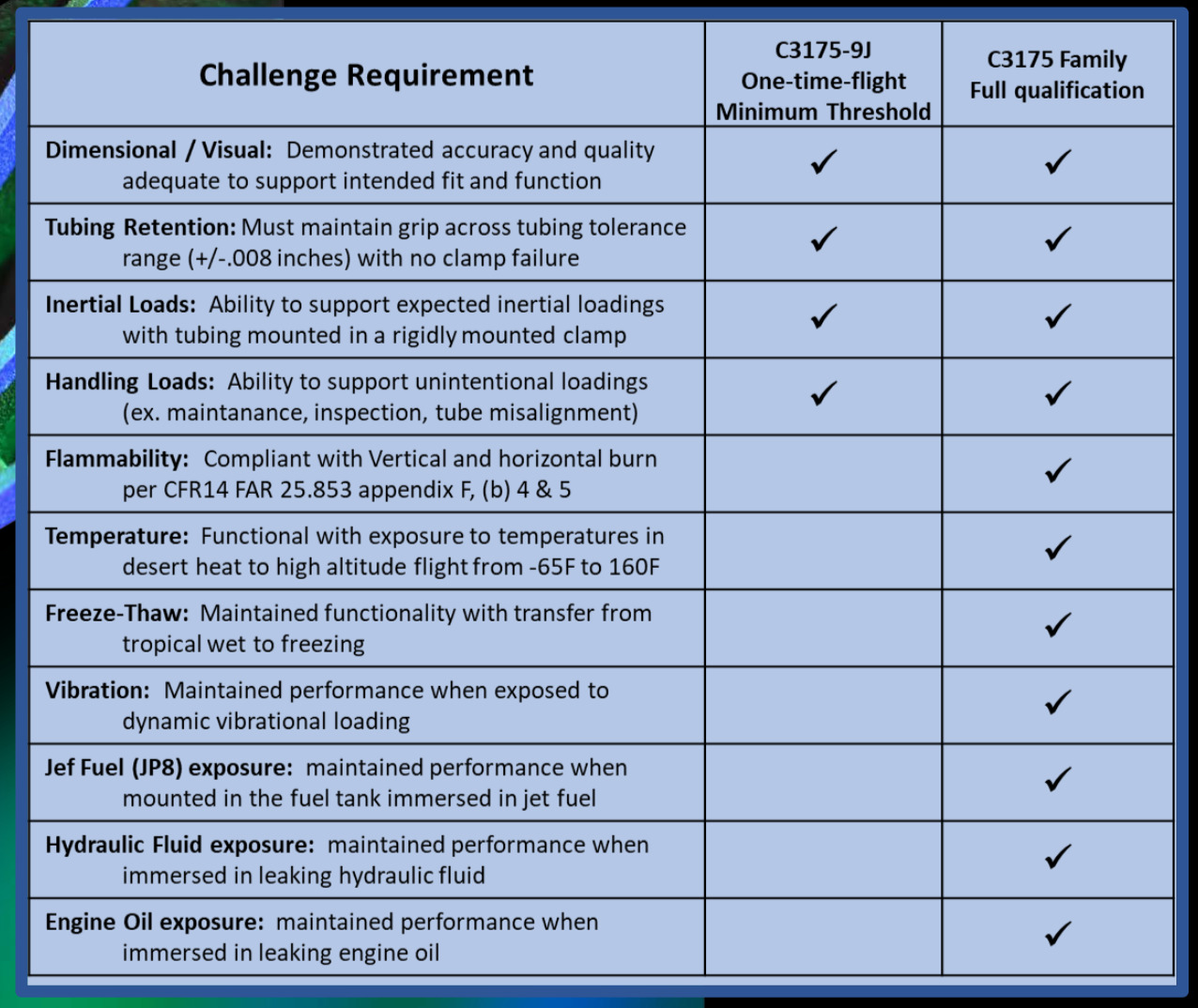 Origin’s team focused on improving on the performance of the C3175-9J clamp, found in F-16 landing gear cavities. The challenge was to leverage the capabilities of modern design, analysis, and additive manufacturing (AM) methods to produce a stronger, more durable part, without increasing weight.

The team reverse engineered the C3175-9J clamp’s original 1966 geometry with assumed material properties and back-calculated the maximum limits of the original design to use as targets for the redesign. Using real-time analysis and simulation and full-scale testing, the team moved rapidly through the design process. They looked at aspects such as fatigue, grip force on the hydraulic lines, pull-out breaking force, installation techniques, vibration, and material strength, and generated over 30 high-quality options.

The team performed simulation analyses, employed topology optimization, used engineering design intuition, and parsed through testing results to iterate each design. nTopology’s nTop platform was used to optimize the results along the way and bring the design to its final form.

The design approach utilized a combination of traditional and cutting-edge design methods. On the traditional side, the team began by using computer-aided design (CAD) tools such as SolidWorks to incorporate the basic geometrical design features (upper and lower flanges of the I-beam shape, web of the I-beam, strengthening struts, cylindrical holes and elliptical tube clamping surfaces, etc). 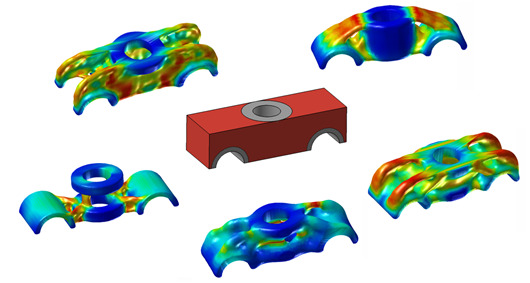 Once the initial geometry was created, the team then implemented the powerful simulation and topology optimization capabilities of the nTopology software platform and the world-class additive manufacturing capabilities of Origin (San Francisco, CA), integrated through a close collaboration between Stress Engineering Services, nTopology, and Origin. This combination of techniques and tools allowed full exploitation of the design freedom offered by AM to arrive at a single-part assembly that is optimized for additive, rapidly manufacturable, and simple to install.

Polymer material experts on the team selected two material candidates for a multi-material part: a flame, smoke, and toxicity (FST)-rated thermoset photopolymer material that is flame- and chemical-resistant and can handle wide temperature ranges temperatures (Henkel 3955), as well as an elastomer (Henkel IND402) with more flexibility. The final clamp halves are 3D printed using 3955 and post-cured using ultraviolet light irradiation. 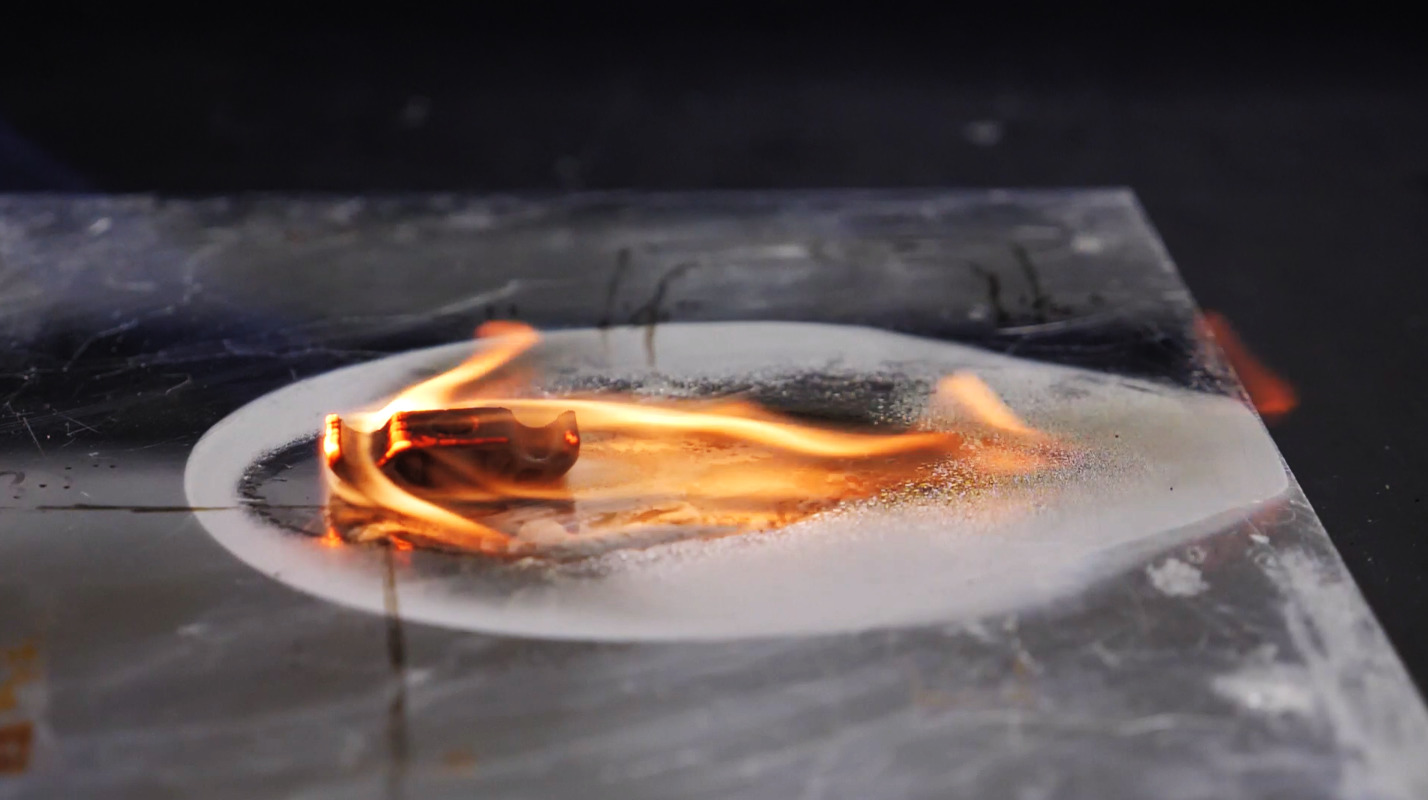 Henkel 3955 is a thermoset polymer material that performs better in this flight application than the original parts, which were made of machined phenolic or injection molded Nylon. Henkel 3955 avoids the stress relaxation behavior inherent in thermoplastic materials, has greater strength and stiffness, is resistant to chemical environments, is compatible with jet fuel and hydraulic fluid, and is flame retardant. The second material, IND402, was used in Origin’s unique multi-material print process capability to connect the two clamp halves, acting like a tether and also holding the screw in place for final assembly.

Printing with the Origin One

Origin’s multi-material print capabilities allowed two materials to be printed in a single build: a flexible elastomer tether that connects the two clamp halves and pre-positions the mounting fastener in one of the clamp halves. The tether is printed in the same build as the clamp components and adheres securely to the clamp’s top surface, but can be removed easily before flight. It allows for easier clamp installation with one hand in space-constrained working conditions, so parts are less likely to be dropped or lost.

Combining three parts into one assembly simplifies inventory tracking and greatly facilitates installation, allowing one-handed installation in about half the time it takes to install the original clamp components. Each assembly is also serialized during print for part inventory, traceability, and part provenance. 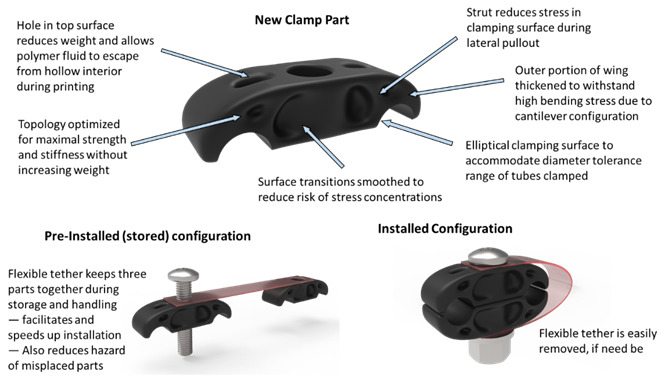 Origin’s 3D printing process can produce 54 clamp halves in each batch in 24 minutes. 1,296 clamp halves can be printed using one printer in a single day. Post-processing a build batch can be completed in roughly 20 minutes.

The final, optimized clamp design for the C3175-9J employed on F-16 aircraft has approximately twice the strength of the original part and weighs about 5% less.

An additional valuable outcome is the team’s rapid design-fabricate-qualify methodology, which applies not only to the C3175 family of hydroclamps but to any other parts that can be produced using the same advanced design and manufacturing techniques used for this project. The nTop Platform can produce similar geometry for any member of the family of parts, optimize the topology of the part, and perform design validation – this is a completely repeatable and programmatic process! The resulting geometry can then be sent to an Origin One production system to be printed and undergo qualification testing within 1-2 days.

The promise of additive manufacturing 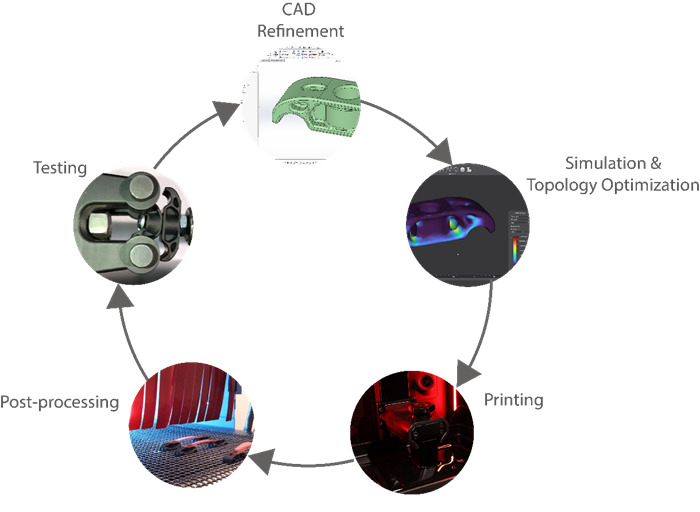 The team’s project approach was to meet the functional requirements in a highly efficient design solution, while allowing room for innovative features that go beyond the basic functionality and offer distinct advantages. The integrated nature of the CAD, topology optimization, analysis, 3D printing, and testing capabilities allowed the team to perform many rapid design / optimize / analyze / print / test cycles, which resulted in an optimized and validated design. During the project sprint, one or more of these cycles was executed daily.

Connect with us to find out more